If you were a kid being raised in the eighties in the United States, there’s a good chance you were familiar with McGruff the Crime Dog. McGruff was an animated canine created through the National Crime Prevention Council to raise awareness of crime and safety. In this cute video, a police K9 dog meets McGruff and has an adorably funny reaction.

In 1980 a handful of public service announcements hit the airwaves using McGruff and his famous slogan, “take a bite out of crime.” These announcements helped educate people about their security, such as locking their doors, in an effort to reduce crime nationwide. In 2018, good old McGruff was reincarnated by GEICO Insurance. Often, police don McGruff costumes for youth outreach programs.

On June 13, at the Oculus train station, the new World Trade Center train station in New York City, a police K9 dog got to meet McGruff. Greg Padden took the funny video of the dog attempting to plant a kiss on the man in the dog costume. McGruff then gave the police dog a big embrace.

Greg was walking through the vast train station when he saw a group of police officers gathered around a public outreach event. A man was dressed up as McGruff as part of the campaign. The children were excited to meet McGruff, but the most excited was the K9 officer and the K9 dog. 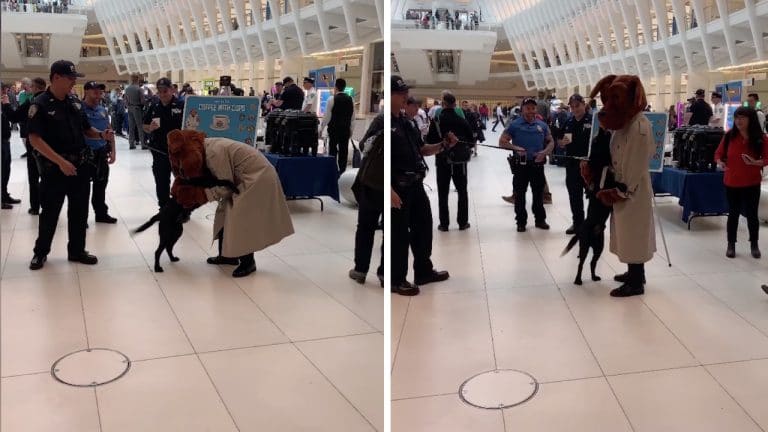 There are thousands of McGruff costumes across the United States. They frequent city community events to continue the eighties campaign against crime. McGruff ads have graced our television screens for decades, and there was even a McGruff postage stamp. McGruff now informs people about modern concerns like cyberbullying and internet fraud.

Police can’t fight crime alone, and this K9 dog seems to understand that, and it looks like the dog would love to have McGruff join the team!