As she was driving, Laura Seymour, couldn’t help but notice a black and white dog chained to a tree behind the house. She became curious and decided to look closer. The dog had created a hole in the mud, which she uses for sleeping. Her bowl was empty. She felt sorry for the dog.

The dog was an Akita. Laura was at first a bit apprehensive about coming closer because Akitas are large, powerful dogs. Their breed is known to have strong protective instincts. But it seemed the dog was friendly for it was wagging its tail, so Laura decided to walk closer and say hi.

It looked like the dog spent her entire time outside. The owner could not be seen. The dog just had a small space where she could walk from the tree to the kennel. 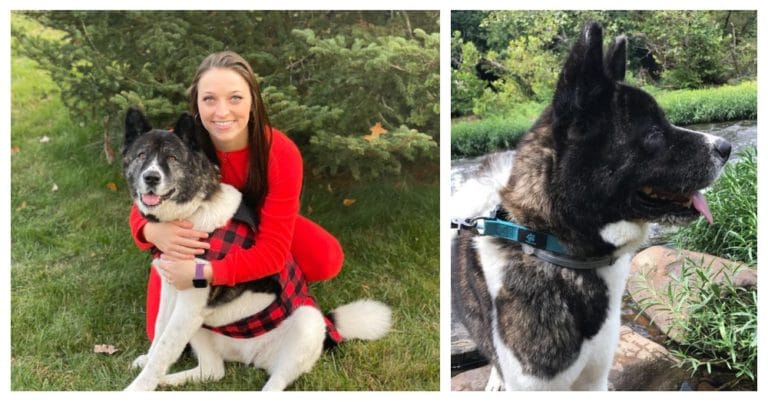 Shortly after Laura bonded with the dog, she started bringing her food and treats and visited her thrice every week. She then named her Takia. Takia recognizes Laura’s car and would jump up and down in excitement every time she pulls up to visit her buddy.

Laura tried calling animal control to report Takia’s case. To her dismay, she was told that under the law, as long as the dog is provided with shelter, food, and water, the animal rescue could not force the owner to give her up. She wanted to take the dog, but she knew she would get into trouble if she did, so Laura just continued to visit Takia for an entire year.

Summer was fast approaching, and Laura became worried about the heat. Takia would be very uncomfortable under the sun, given that Akita’s fur is very thick. Laura’s mom encouraged her to give animal control another try. They called back a day after to let her know that the owner had been asked to surrender the dog. She volunteered right away to take on the pooch.

Laura brought Takia home and gave her a lovely bed to sleep in at night and, of course, food to eat. She became more excited when she found out Takia was only five. She knew this meant she’d have more time to spend with her.

See more of Takia’s story in the video below.

Lost Dog Ends Up In Prison, Later On Became Friends With Everyone

Man Bravely Swims In The Freezing Water To Save His Precious...

A man did something very heroic when he thought he lost his dog. He was walking his dog near the pier one day when...

Couple Try So Hard Not To Foster Fail But End Up...

Lost Dog Ends Up In Prison, Later On Became Friends With...

This Bonded Pair Of Pit Bulls Got Married To Ensure That...

Boy Reunites With His Four-legged Best Friend After Being Separated For...